As I spend significant amount of time working with computers, it's important to me to have a desktop environment which does not distract me from work.

Moreover I expect my system environment to help me be more productive and to complement my habits in context of how I interact with the environment.

In this post I'm gonna describe how is my linux installation setup and main tools I use on every day basic for past 6 years and why.
Do not expect configuration tutorial but rather high-level toolset overview.

As majority of current Arch users, I started using Xubuntu (Ubuntu with xfce desktop environment instead of gnome) as my first UNIX based OS.

Xubuntu was certainly better than Windows as it allowed me to "hack" it around and more importantly, it had a proper shell.

However, at the end of the day, it was my unorthodox doing that led to all kind of crashes during system upgrade and ultimately was forcing me to reinstall the system.

Lesson learned: Ubuntu is a robust preconfigured system made for general public, not necessary for developers, serving as out of the box conventional desktop everybody is familiar with.

It wasn't until some years later when a colleague of mine introduced me to Archlinux distro, that solved most of my issues.

These are Archlinux features that make it a superior distribution for me personally:

All configuration files are tracked in (public) git repository and reside in single .dotfiles directory (check it out if you want to see how something is configured).

In there, configuration files are organized in separate folders by topic and symlinked into $HOME when you run script/bootstrap.

This makes it really simple to add and edit configuration and when you need to reinstall once in roughly 5 years, you run single command to get everything setup exactly how it was before. 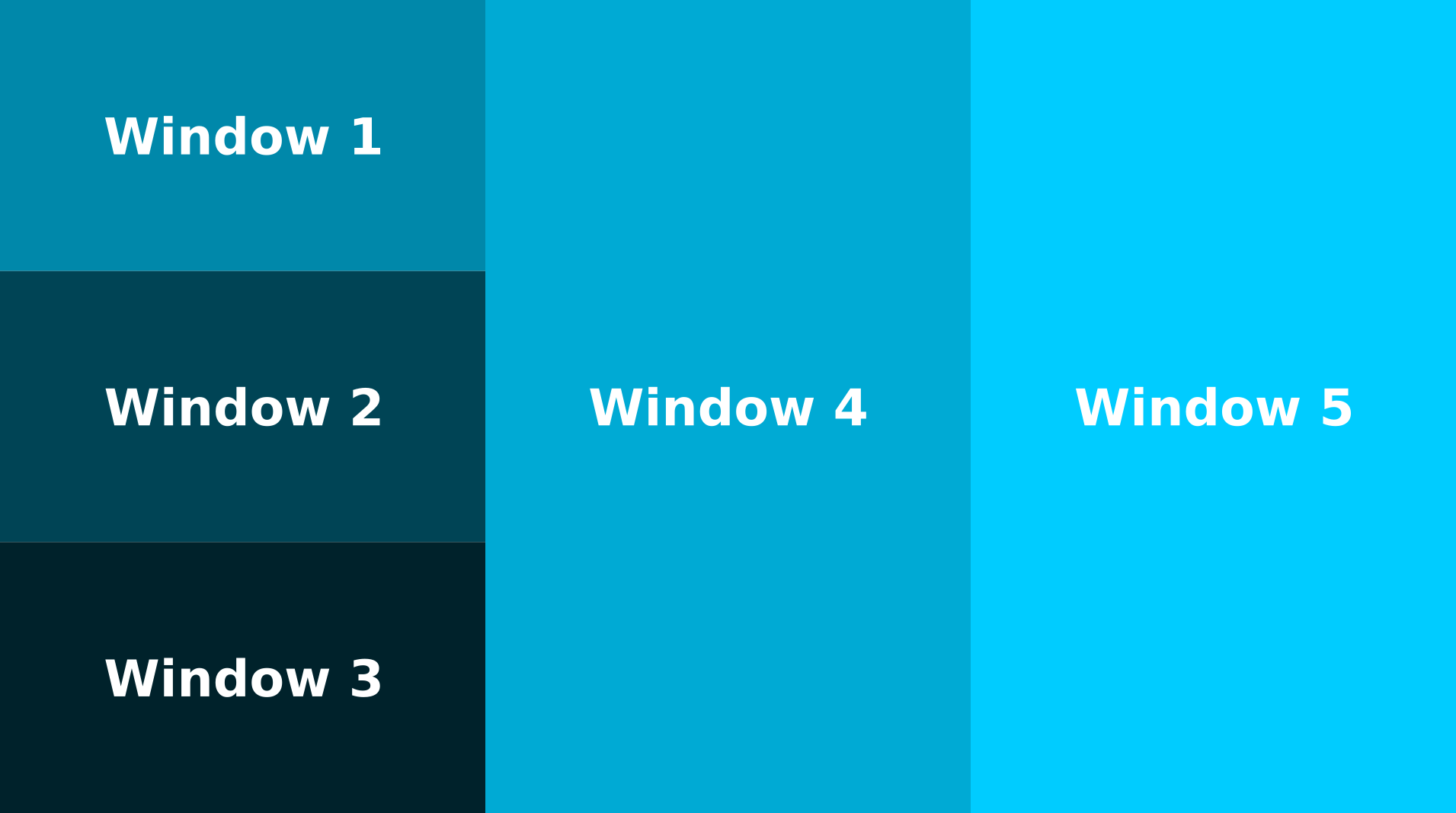 Note: You can still have classic floating windows but those are almost always redundant.

Usually, the user creates, deletes, moves, resizes or focuses windows with shortcuts (in addition to mouse navigation). Mine are defined in such way so that they match vim-like window manipulation mappings:

Since I use Vim as my main editor, having the same shortcuts that do the same thing globally at system level, not just in the editor, makes it really convenient.
I'm too lazy to travel with my right hand from keyboard to mouse and back just so I can focus different window...

There are also 10 workspaces available which can contain different running applications. I switch between them with Super+<0-9> mappings.

tmux is a terminal multiplexer. It lets you switch easily between several programs in one terminal, detach them (they keep running in the background) and reattach them to a different terminal.

What makes zsh superior to regular bash are its autosuggestions & tab-completion & syntax-highlighting features.

Lets look at some examples:

The grey text behind cursor that you can see in the preview suggests best matching command based on what you have typed so far and on your shell command history.

You can accept suggested command anytime with Ctrl+e.

Moreover if you want to see list of available commands or arguments from man pages, you just press Tab key.

Also you can notice that git command is highlighted with green-ish color - that signalizes that command is recognized and the shell can find appropriate file with executable flag.

I also use some navigation tools that make a shell whole a lot more intuitive:

vim does not need an introduction. Everybody in the field has at least heard of it. And if I exaggerate a bit, its either the greatest piece of software or source of fear and frustration.

It's out of the scope of this article to go through individual mappings and plugins I use.
However if you want to see the plugin list, its available HERE.

What are those fancy arrow-like UI segments? You are asking... Those are custom status lines for vim & tmux and zsh, powered by powerline plugin.

vifm is a curses based vim-like file manager.
It's like Total Commander but better.
If you use vim, you will love vifm.

If you got all the way down here, you may be asking where are some buttons, where is my system bar with time and tray area with application icons or start menu? The answer is simple, there are not any.

I have found out I do not need any system wide status bar with icons and basic information like date-time etc... It would be wasting of screen space the most of the time anyway and source of distraction.

So how do I start applications, turn off the computer, connect to wifi or manage removable devices like usb flash drives, you are asking? I use dmenu or rofi.

What is dmenu and rofi

dmenu is a dynamic menu. The user gives it possible menu options as the input, and it creates a graphical menu with one item per line. The user can then select an item, through the arrow keys or typing a part of the name, and selected option is returned as the output. The user then takes the output, lets say it's Power-off and implements the action - powers down the computer.

So in practice, applications are built around dmenu that are focusing on single task, like system power management, wifi connection, mouting/umouting removable devices etc...

You bind the application to a shortcut (or button) eg. Super+m and dmenu will popup a list eg.: of connected flash drives that you can mount or umount.

The comment system is powered by GitHub.
You can comment directly below, but you would need to authorise the Utterance's app to post issues to GitHub on your behalf.